YA Highway: Cover Reveal and Giveaway: FALLING INTO PLACE by A...

YA Highway: Cover Reveal and Giveaway: FALLING INTO PLACE by Amy Zhang:

The folks over at YA Highway have found the cover of Amy Zhang's Falling into Place! Go take a look and enter to win an ARC from Amy.
Posted by esc_key at 8:23 AM 6 comments:

Happy New Year, all! As of today, I am open to queries again. I can be reached at queryemily at forewordliterary dot com. Please see my bio for more details.

So far 2014 is shaping up to be pretty busy. I would still like to do a conference a month, and I've accepted invitations to several.

This is the tentative schedule if you would like to pitch me in person:

ETA: I had previously posted I'd be at Northern Colorado Writers Conference in March, but this does not appear to be happening. Sorry for any inconvenience.
Posted by esc_key at 1:33 PM 2 comments:

As of today, November 4, I have joined Foreword Literary Agency as an agent!

Soon I'm going to start blogging over at the Official Foreword Blog. Not really sure what's going to happen to this blog, since I rarely post. I'll figure it out.

Until then, you can still follow me on twitter and tumblr!
Posted by esc_key at 8:50 PM 2 comments:

I'm going to close to unsolicited queries as of today. I am behind and need to catch up. I will let you know if/when I open back up again.

Sorry for the inconvenience!
Posted by esc_key at 9:18 AM 2 comments:

I've been asked to be on a panel next weekend at the Ridgefield Writers Conference in Ridgefield, CT, September 28.

I am also beginning to accept conference invitations for 2014. I have accepted an invitation to the Liberty States Writers Conference in Iselin, NJ. That will take place March 15, 2014. More details to follow.

If you are on the planning committee for a writers conference and would like me to attend, please email me and tell me about it.
Posted by esc_key at 3:08 PM No comments:

Registering Copyright, a Guide by Me (Mostly Intended for Self-Published Authors)

One of the things I did at my old job was register copyright of all our titles. Since I became an agent, this has become mostly useless information in my head. But the other day I saw a website offering to register your copyright for $120 for application, plus filing fee.  (The filing fee is $35.) I was shocked.

So in the interest of saving you money, I am providing this basic tutorial on how to use the US Copyright website to register the copyright of your book. I'm a big fan of saving money, even if it's not mine.

Please note: You do NOT need to do this if your book is unpublished or if it is being published by a large publisher (most publishing contracts make this the publisher's job).

Also know that US copyright law allows for some copyright protection the moment the work is set in a "fixed tangible form" that is, the moment you wrote or typed it up. Copyright registration is really just a nice thing to have most of the time. However, it is something you need to provide if there is any litigation based on your work, or (more happy circumstance) if a major motion picture studio wants to buy the rights to it.

Details one using the electronic copyright office (eCO) below the cut:

My Life as a Lumberjack

I've been crazy busy at Book Expo America this week. But I'm excited to tell you guys that Sara V. Olds' MY LIFE AS A LUMBERJACK was released on May 30. It's a really fun book, and the ebook is only $2.99 so buy it!

Mercedes “Benz” Bennion heads into the Utah mountains for a summer job with the US Forest Service. It'll be a bit like summer camp but with hard hats and water fights.

Benz is bit boy crazy, and has even been called a “flirt” (that’s fair, she concedes), so when she is surrounded by good-looking co-workers and handsome rangers she is at her happiest. How could she possibly pick who’s the best? There’s Norm (the Norse god)—the program director, Dan (Dan-Dan the Mountain Man) who practically stepped out of historical adventure novel, Sam, Benz’s youth team leader, and even teammate, Matt who keeps saving her life. But is the most attractive necessarily The One?

This summer promises to be one both Benz and her heart will never forget.

The Connecticut Authors and Publishers Association conference, CAPA-U, is this Saturday in Hartford, CT. I'll be there.

The conference sent me submissions from pitch session attendees in the mail. It was fun to read them today and see the return addresses. Normally those are just words. But since I'm from CT originally I was like, "I actually know where these places are!"

It takes very little to excite me, I guess.

New Adult: What Is It?

Today I got into an interesting conversation on Twitter about what the phrase "New Adult" means to people. It wasn't that long ago that agents and editors were saying it's not a thing. But recently, Publishers  Marketplace made a new category for New Adult in its deals listings. So I guess that means it is a thing now.

I personally don't know much about it. In my head, "new adult" means contemporary romance featuring college-aged or twenty-something protagonists. Much of what I know, I learned from the Clear Eyes, Full Shelves podcast on the topic (You can go listen to that now, I'll wait). But on Twitter I was told it is so much more than that.

So I decided to do some research. I went to the New Adult category on PM and looked at the sales they list. There are only 24 sales there right now, and I am sure there are plenty of self-published or indie published NA books out in the world--these are just the ones that were fancy enough to rate a mention in PM. 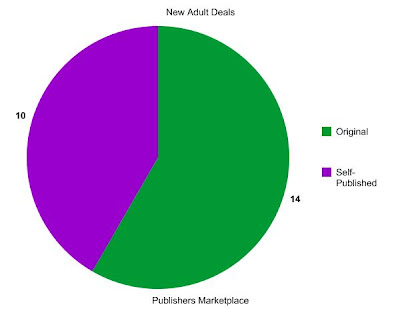 The above graph shows how many of the deals where for original works vs how many were for books that had already been self-published. Honestly, I rather assumed that self-published would be the majority. (I should note, however, that some of the deals that were sequels, prequels or otherwise based on already self-published works are in the "original" category so long as that text wasn't actually already published.) But it's still pretty even. Readers are still finding these books, and publishers are getting in on it. 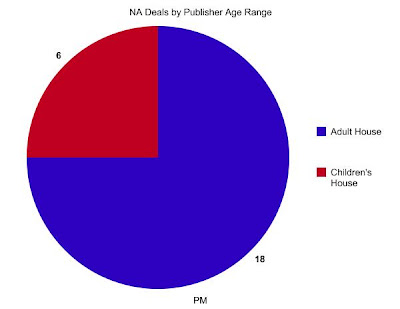 Another thing that interested me is where are these books going to be shelved. That was a problem I have discussed with numerous other agents and editors. Ultimately, a book can be shelved in one part of the store. So are they adult or children's? I looked at which imprints were buying the books and sorted them by adult imprints or children's imprints. And you can see that, NA books are not really going to children's houses as much as they are going adult places. This sort of confirms my impression that "NA" is for adult publishers who want to get in on the "YA" market & readership. 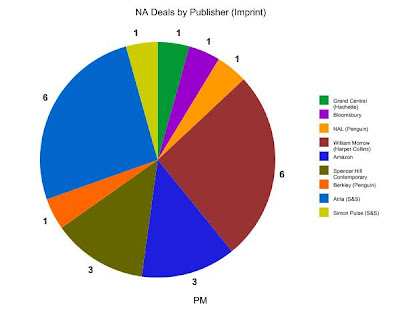 Should I ever acquire a NA novel, I'm going to want to know which houses to send it to. These are the places those 24 deals were with. You can see that William Morrow (at Harper Collins) and Atria (at Simon & Schuster) the top buyers of NA. These are both adult imprints, of course.

Surprisingly, St. Martin's--which kind of coined the term "new adult"--is not on the list. 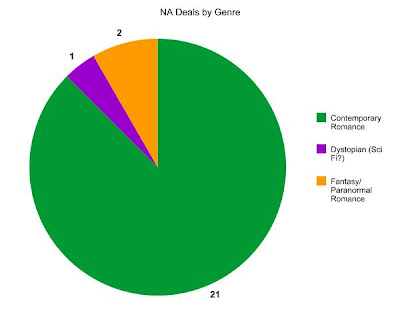 Finally I looked into what genre NA books are (besides being NA, duh). Like I said above, I associate NA with contemporary romance but I've been pitched Sci-Fi, Fantasy and Mystery NA which sometimes confuses me. (Why not just shelve it in those genre spaces instead of worrying about the fact that NA doesn't have shelf space at the moment?)

Anyway, I am not entirely right. There are NA sales that are not contemporary romance. These sales were fantasy and dystopian--kinda of younger paranormal romance. I've also heard from a couple NA authors on Twitter who wrote historical new adult novels that got picked up before this PM category was introduced.

So that's what NA means to Publishers Marketplace and to me. What do you think of when you think of "new adult"? And do you have any favorite new adult novels?